A building with 1001 stories

Museum of the Future, Dubai (AE)

In a 80-meter-high ring made of stainless steel, the city of Dubai takes a look into the future. There were special challenges when installing the Geberit flush-mounted cisterns in the “Museum of the Future”. It is just one of many stories about the construction.

If the “Museum of the Future“ in Dubai gives the world a real glimpse into the future, then joy can begin. At least externally, this future looks spectacular – various media and experts already describe the building as the “most beautiful“ or “creative“ building in the world. The museum is built as a so-called torus, as a thick ring, a good 80 meters high, edgeless. And with a hole in the middle.

Working on the rope
That was difficult to build, reports Mohammed Al Samaneh, technical advisor to Geberit in Dubai. From time to time, he took pictures during the years-long construction phase – with workers, for example, who worked on ropes secured on the consistently round surfaces. “It was spectacular to watch,“ he says.

The fairytale building probably has 1001 more stories to tell. Louise Pitt, Marketing Manager at Geberit in Dubai, laughs briefly. “Pretty much every aspect of this building tells its own story,“ she says. The elaborate construction of the consistently round building, for example, whose stainless steel façade alone covers 17,600 square meters and was built with automated robot arms. 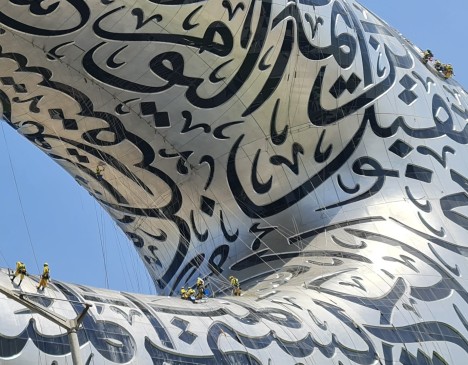 Secured with ropes, workers had to carry out installation work at the museum.

Or the surface, adorned by a poem by the Regent of Dubai, Sheikh bin Rashid Al Maktoum. “He is not only regent of Dubai, but also a poet,“ says Louise Pitt. The calligraphy on the façade glows at night thanks to 14 kilometers of programmable LED lights – so you can read the poem around the clock.

A door in a glass
Mohammed Al Samaneh also has a story to tell – about the toilets in the futuristic museum. Flush-mounted cisterns from Geberit are installed there, as well as infrared controls; and that behind glass walls. “That brought two challenges. On the one hand, it was important not to destroy the glass during installation,“ says the technical consultant. On the other hand, access to the cisterns has become difficult because of the slim infrared sensors. “We proposed doors in the glass walls in order to be able to carry out maintenance work on the cistern if necessary.“ The planners agreed. 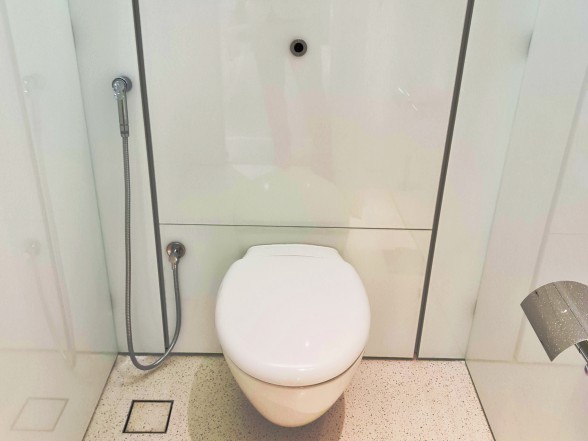 The infrared control is built into a glass door ... 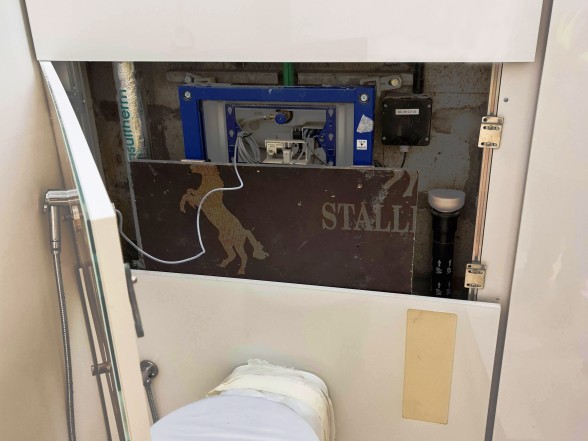 The hole in the torus
Of course, there are many more stories about the Museum of the Future. To all the “levels“ in the building that illuminate various aspects of the future such as mobility, medicine or space exploration. Perhaps the museum can show where the future is headed. But it is careful not to give a final opinion. The hole in the middle of the torus testifies to this. Its emptiness stands for the unknown that man wants to discover. It stands for the future, which will one day be the present. And from which you can catch a glimpse in the museum.

The Geberit WC flush control with electronic flushing triggering, mains operation, double-volume flushing, and Infrared button is a compact way to install an automatic toilet flush. The single flush can be triggered via the actuator plate, mounting of cover plates and stop-and-go flushing triggers is possible, the power supply works via power supply unit. 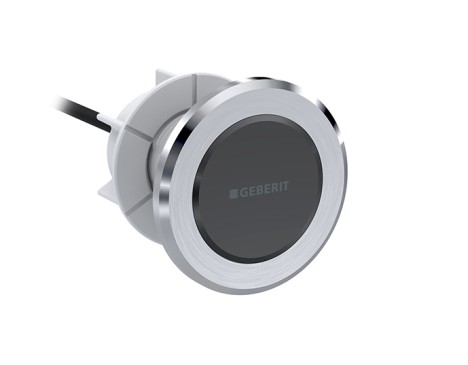