Without an apprenticeship diploma, many professional development opportunities are denied. Geberit supports talented employees who want to catch up on their professional qualifications in adulthood - like Hamid Isić and Mevljudin Memedi.

School – vocational qualification – diploma: this is how many young people start their working lives. The apprenticeship diploma is the key that opens further doors – to the professional world, but also to further technical and higher education.

If the vocational qualification is missing, many of these doors remain closed forever – talent and professional experience or not. Various reasons can lead to this important certificate being missing from the portfolio: dropped-out apprenticeship, difficult biographical circumstances or even the fact that many foreign diplomas are not recognised in another country.

With the support of Geberit
For many years, Geberit has supported employees who want to catch up on their missing professional qualifications – for example Hamid Isić and Mevljudin Memedi. After completing their apprenticeship, both now work as shift supervisors in product line 22 in the plant in Jona. And for both of them it took longer until they knew where their professional journey should go.

Hamid Isić
Hamid Isić, now 29, was born a Bosnian in a Croatian refugee home. His father, then a seasonal worker in Switzerland, brought the young family to the canton of St. Gallen. Here, in Wil, Hamid Isič grew up and completed his apprenticeship as a floor layer. He did not become happy in this profession. At the age of 21, he changed industries and took up work as a slitter in the packaging industry. When his employer at the time had to close the company, Hamid Isić was at a crossroads: should he venture into something new?

A single job application led Hamid Isić to Geberit as a production employee. After just three months, his supervisor at the time approached him: “With a vocational qualification, you can continue your education.“ No sooner said than done: today, Hamid Isić leads a team of 30 employees as a shift supervisor. “I am very happy about the opportunities that Geberit has opened up for me,“ he says.

“I am very happy about the opportunities that Geberit has opened up for me.”
Hamid Isić 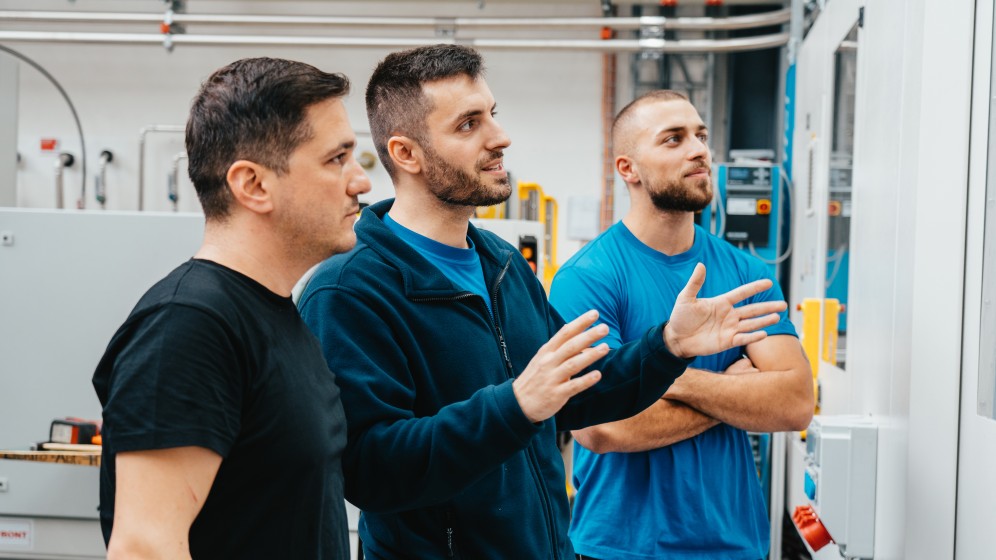 In front of the 2560 turnover plate machine: Mevljudin Memedi (centre) discusses with his employees Delor Durzku (right) and Ali Aktaş (left), the procedure to be followed when problems arise. (Photo: Julia Dunlop)

Mevljudin Memedi
Mevljudin Memedi also arrived at his current position as shift supervisor in product line 22 in a roundabout way. His father, a seasonal worker from Macedonia, brought the family to Switzerland in 1992. But it took longer for Mevljudin Memedi to feel at home in Switzerland. Repeated discrimination at school and in his apprenticeship caused him problems, so much so that he broke off an apprenticeship he had started. At the age of 19, he started working first in construction and then in production: “I took any job.“

“Here you see the person, not his background. Here you see his potential, his strengths.”
Mevljudin Memedi

It wasn't until he was 27 that he decided, “It's actually a pity if you could do something and don't do it. I can and I want more.“ A year later he started at Geberit. It didn't take long before his potential and motivation were recognised. With the support of Geberit, Mevljudin Memedi began his apprenticeship as a plant operator. Today, two years after completing his apprenticeship, he is responsible for 12 people on his shift - and is planning the next step in his further training. He looks back on the support he has received with great gratitude: “Here you see the person, not his background. Here you see his potential, his strengths.“

In addition to regular training, the Swiss education system also provides basic vocational training for adults. Article 32 of the Federal Ordinance on Vocational and Professional Education and Training allows for various VET programmes for adults without a regular VET qualification. Prerequisites are at least five years of professional experience.