With its new tap system, Geberit promises a flawless installation of wall-mounted taps at the first attempt. A height-adjustable installation element specially designed for washbasins does the trick.

Electronic washbasin taps in public and semi-public buildings make washing your hands particularly hygienic. Furthermore, the taps are a water-saving option because the water flow stops automatically when removing the hands from the sensor. However, the installation of touch-less wall-mounted taps was a tedious matter in the past.

Precisely aligned
With its new tap system, Geberit has developed an impressive solution to remedy the specific problems that arise when planning and installing wall-mounted taps. The installation elements (Duofix and GIS) designed for washbasins ensure an easy and safe installation of the design taps Piave and Brenta. They are based on Geberit’s proven system technology and, in the case of a wall-mounted tap, feature a height-adjustable crossbar for holding and anchoring the base of the tap. Not only does this ensure that the tap housing is precisely aligned (vertically and horizontally) and firmly fixed, it also minimises the potential for costly errors.

Positive Feedback
In summer 2016 a practical trial carried out at the company's headquarters in Jona (CH) Geberit demonstrated impressively that the installation of wall-mounted taps not only sounds simple. “Thanks to the Duofix installation element specially designed for washbasins, the new Geberit wall-mounted taps, on the other hand, can be installed quickly and without any errors”, confirmed Sebastian Fago, a master plumber and heating engineer from Solingen, Germany. He was one of a dozen installers from Germany and Switzerland who had the opportunity to install the prototypes of the new wall-mounted taps during the practical trial.

With the exception of the infrared sensor, all the electronic components as well as the mixer, valves and the power supply are housed in a separate function box. The box is installed in the prewall in an easily accessible position under the washbasin. This makes it easy to maintain the system and adjust the parameters at any time. 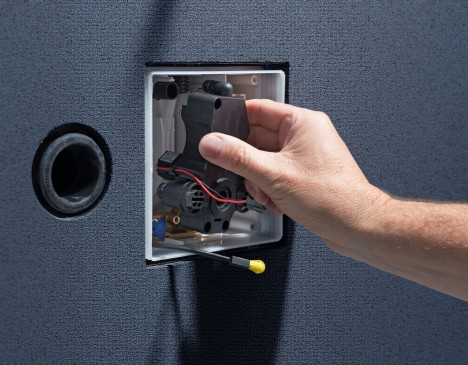