Vienna is growing - towards the sky. On the former site of the old customs office, three towers named TrIIIple are shooting upwards with up to 33 floors and over 1000 residential units. Geberit products are at the top of the game.

Three towers of up to 33 floors each, over 1000 residential units, around 70 000 m2 of total floor space and a project volume of more than 300 million euros: TrIIIple on the Danube Canal in Vienna impresses with numbers. And with a dash of opulence: rooftop pool, lounge with library, event kitchen, lounges for barbecue, gaming, cinema, plus shared roof terraces, restaurants and bars determine the living feeling in TrIIIple.

A prominent feature of the skyline
Two towers with classic flats have been completed since August 2021, the third one with furnished micro-apartments has already been occupied since the end of March 2021. This not only adds more than 1000 residential units to Vienna, but also distinctive elements to the skyline.

The division of the towers into different height zones is intended to visualise that the three buildings are in a dialogue with each other, speak to each other. The zones reflect the scale of the city. They also have the advantage that the residents can describe where they live - in the upper part, above the large terrace, for example.

Geberit products make an important contribution to the functionality of the skyscrapers. The Pluvia roof drainage system not only ensures efficient water drainage. It also enables maximum use of space, as it only requires a few downpipes.

Sound insulation is also a decisive factor in high-rise construction, which is a very sensitive area in building drainage. The builders of the Soravia Group therefore opted for the sound-insulating Geberit Silent-db20 drainage system. The Huter WC mounting elements and Geberit Sigma flush-mounted cisterns used in the TrIIIple are also well suited for sound-insulated floor and wall mountings. 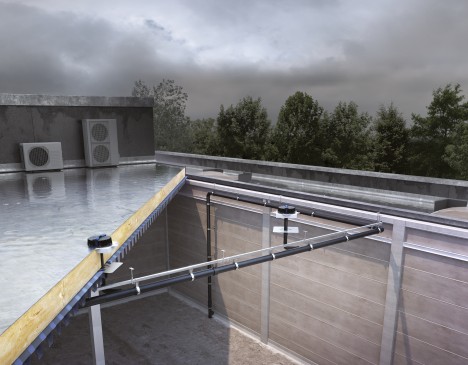