At a height of 632 metres, Shanghai Tower is the second-tallest building in the world behind the Burj Khalifa in Dubai (AE).

Although its immediate neighbours – Jin Mao Tower and the Shanghai World Financial Center – aren’t exactly pint-sized, the 2016 completed Shanghai Tower easily leaves them in its shadow. A characteristic feature of the third building in the world to be designated “megatall” is its winding shape, with the 120-degree rotation having the positive effect of reducing the wind load by 24 per cent.

In addition to a luxury five-star hotel, the mixed-use skyscraper is also home to conference rooms, restaurants, offices, exhibition facilities and a shopping centre. The building also features green oases – or sky gardens – on various levels. Three express lifts – which at 65 km/h hold the record as the fastest lifts in the world – whizz visitors to the 119th floor in next to no time, taking them to just below the observation decks on the 121st and the 123rd floor, where they can enjoy a breathtaking view of the hustle and bustle of the world’s most populous city down below.

Shanghai Tower features the actuator plate Sigma50 with water-saving dual flush, which was designed by Christoph Behling. While the base unit made of durable die-cast zinc is extremely robust, the actuator plate exudes a sense of lightness thanks to its frameless design. The Sigma50 is available with glass, plastic (both in various colours) or metal surfaces. 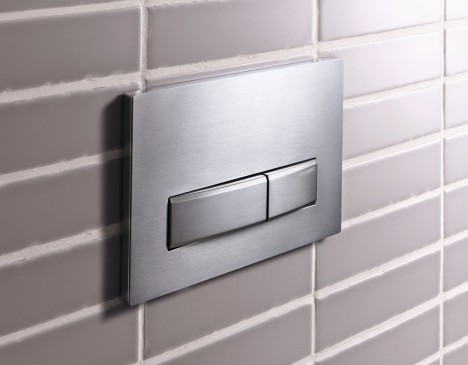